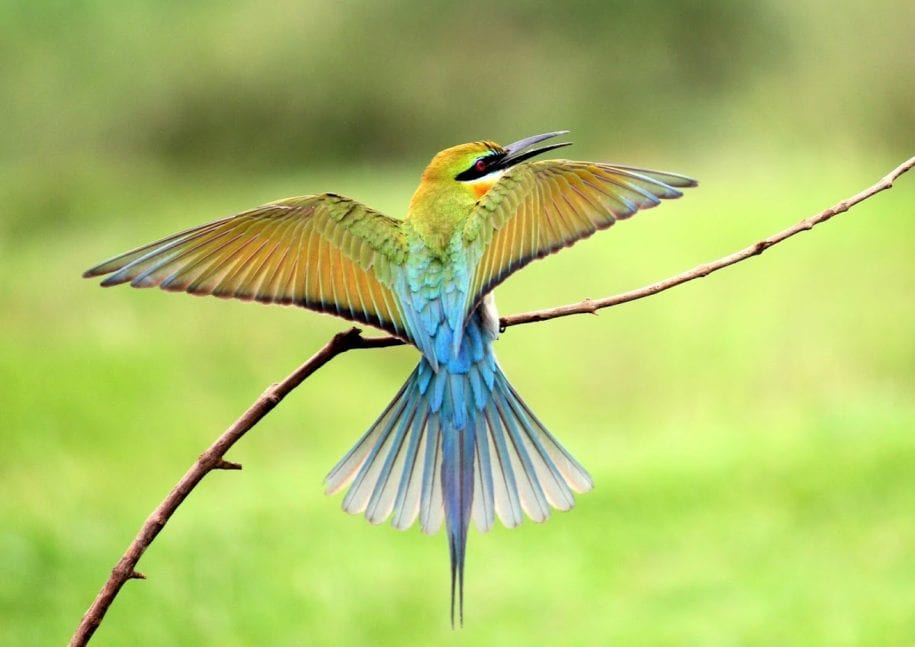 White sandy beaches, impressive cliffs and turquoise blue waters. It is clear why the Nusa islands are a popular tourist destination in Indonesia. Especially for those seeking out world-class dive sites, surfing or a beach holiday. Far fewer tourists focus their attention on the green side of the islands.

Surprisingly the mangrove forests covering the north side of Nusa Lembongan and lining the northeast coast of Nusa Ceningan, are often overlooked. The Nusa islands have a lot to offer for the wildlife enthusiast or anyone seeking out some real nature experience during their time above the waves.

Still looking at what to do in Nusa Lembongan or Nusa Ceningan? Discovering this fascinating ecosystem might just be the perfect addition to your holiday in Indonesia.

If you are not only interested in marine creatures, but also want to know what animals you could encounter above the waves, then this is the read for you. Here we’ll cover some of the fascinating birds that you might catch a glimpse of along the island’s coastline.

With Ceningan Resort tucked away between the Nusa island mangroves, you don’t have to venture far. A keen eye, ear or a pair of binoculars might come in handy though. We encounter some of our island neighbours on a regular basis, whereas finding others might require some patience or expertise.

First, a little about the mangrove forest itself

Mangrove forests are often referred to as the nurseries for coral reefs. Many coral reef fish species spend a certain period of their juvenile life in the refuge provided by the tangled web of mangrove roots. Snappers, tarpons and halfbeaks are a few of the species known to either spawn or mature among them.

Mangrove forests are structurally diverse ecosystems. This also is one of the reasons they sustain high biodiversity. Furthermore, marine life is attracted by high food availability and cooler water with higher oxygen content. And with a high diversity of marine life in shallow water comes a richness of other island wildlife. These are the ones we’ll see hunting along those green-blue coastlines of Nusa Lembongan and Nusa Ceningan.

Mangroves on the Nusa islands

The mangrove forests have a particularly interesting role on the Nusa islands. Year-round, it is actually the greenest area within the whole island landscape. The islands receive significantly lower rainfall than mainland Bali. Besides that, they consist of calcareous soil with little to no water holding ability. This makes it so that next to patches of tropical forest, the islands are largely covered by scrublands and savannah habitats.

These habitats harbour their own biodiversity but don’t display the richness found along the green coasts of the islands. That’s why visiting the mangroves of Nusa Ceningan and Nusa Lembongan should definitely be on your to-do list.

Furthermore, mangroves play an unmissable role in coastal protection. Their dense root system not only helps to bind and build soils. They also reduce the speed of wind, waves and flooding, protecting the lands behind them.

With mangroves being on the verge between land and water, they harbour a great number of interesting bird species. For everyone with a keen eye or ear, birds are by far the easiest spotted type of island wildlife. We’ll mention a few of our regulars here. For the true birdwatcher, the Nusa Penida bird checklist may come in handy. Just to make sure your Indonesia bucket list is complete.

Did you see a metallic blue flash shooting by along the mangroves? Then you’ve probably witnessed a Cerulean kingfisher (Alcedo coerulescens). With their bright azure-blue feathers, they are as easily recognized by their looks, as by their high-pitched calls (“ti ti ti”).

They are common in coastal habitats and wetlands in Indonesia, ranging from Sumatra to Sumbawa. If you pay attention, this is a species you’d definitely come across in the Nusa island mangroves. Sometimes it is even trying to catch fish from the Ceningan Resort jetty!

The Pacific reef heron (Egretta sacra) is also a common visitor along Nusa Ceningan and Nusa Lembongan’s coastline. It prefers rocky areas, headlands or reefs but is often seen flying along the island’s mangroves. It is quite common throughout Indonesia, but it has an interesting trait that might confuse those who don’t know their bird guide by head (read: most of us). It is known to appear in two colour morphs: either being all slaty dark-grey or completely white.

An even more typical mangrove inhabitant on the islands is the striated heron (Butorides striata). It is also known as the mangrove heron. Just in case you’re wondering where to look for this species.

You might not get the most excited to see a common bird, creeping around the mangroves in search for its prey. Yet, it is known to show some curious behaviour. Rarely seen in birds, it’s found to use ‘bait-fishing’ as a means to catch fish. It was observed picking up breadcrumbs (or other materials) and dropping them into the water. Next, it waited for fish to come around to investigate this possible source of food. Easy peasy!

If you are lucky you might see small groups of yellow coloured cotton balls chittering higher up in the mangrove trees. Chances are you are listening to the chit-chat of lemon-bellied white-eyes (Zosterops chloris). The name gives a quite complete description of the species. It has a bright yellow belly and a more olive-coloured back. The most distinctive feature is, however, the white circle around the eyes.

The species is endemic to Indonesia. Although relatively common within its range, it doesn’t occur on some of the larger islands like Java and Sumatra. Lemon-bellied white-eyes are opportunistic as it comes to habitat choice. They are also encountered in more disturbed habitats on the islands. On its menu are different kinds of fruits, invertebrates or nectar.

Birds beyond the island’s mangroves

Many other birds that may be encountered along Nusa Ceningan and Nusa Lembongan’s coastlines aren’t solely attached to mangrove habitat. Waders like the Pacific golden plover or the grey-tailed tattler roam around the island’s mudflats or tidepools on rocky shores. These are migratory birds. They seek better weather conditions in Indonesia before returning to their breeding grounds in Siberia again.

Particularly colourful birds found around the Nusa islands are the blue-tailed bee-eater and the black-naped oriole. These birds inhabit forests, gardens and farmlands. So always keep an eye out if you cruise around Nusa Paradise!

Last but not least, it is worth mentioning the white-bellied sea eagle. There are good chances of sighting them in the islands’ coastal areas (well, lucky us!). With a maximum wingspan of 2.2 meters, they definitely strike awe if you see them flying along. The species is, unfortunately, easily disturbed by humans. Hence, it avoids areas with high human interference.

There is more than meets the eye

You can consider this shortlist of birds a teaser. Something to get you keen on what’s fluttering by along the Nusa islands’ coastline. A little warming up for the active bird spotter or the curious nature lover.
There is, however, much more to the mangroves than meets the eye. Want to know what other creatures are hiding between those green leaves and dense roots? Which animals we sometimes see along our jetty and which ones are the real hidden gems? You can read all about the other fascinating mangrove inhabitants in our next blog!

With credit to Amanda Brown for photos of many of the beautiful birds around our resort.